Skip to content
Posted on December 31, 2014 – Written by Chris Kasten

Rush Creek, Mt. Wilson, CA.  On the first day of Winter, I ascended Rush Creek, a steep and deep canyon on Mt. Wilson’s north side.  After spending the night at a completely unpeopled, chilly, yet peaceful DeVore Trail Camp, I went up upstream to West Fork Campground under steel gray skies.  That day really felt like winter, not so much in 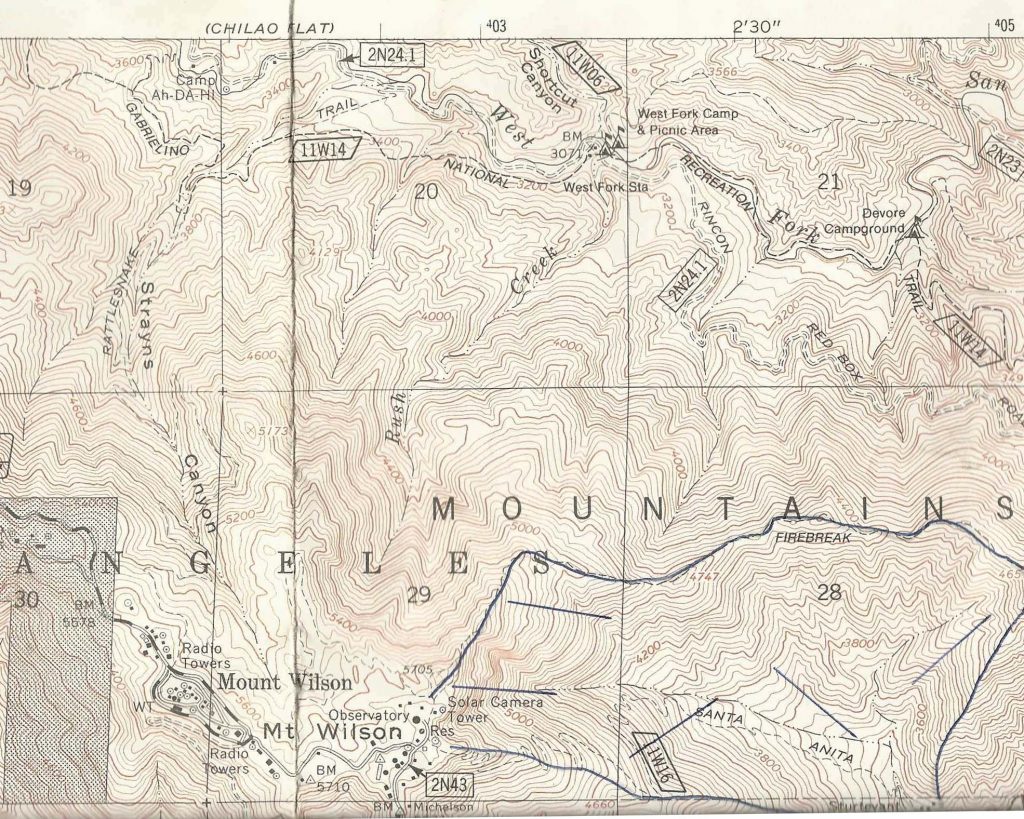 Here’s a detail of Rush Creek, which I ascended from West Fork Campground to Mt. Wilson.

temps and winds, but in that flat gray light that’s such a part of our days in the canyons of the San Gabriels.  Lots of alders and oaks have come down across the one and a half miles of the Gabrielino Trail that crosses and re-crosses the West Fork of the San Gabriel River between these two campgrounds.  In many places, white alders seem to have broken mid way up their trunks, leaving behind shattered snags by the dozens.  Oaks have laid down, too.  Over and over, I kept on seeing the fresh, black carbon scars on the bases of trees from the Station fire of 2009.  Dams of driftwood had piled up high across the stream here and there, yet the old West Fork meandered under and through, not seeming to care at all about these very temporary nuisances in the life of a river. 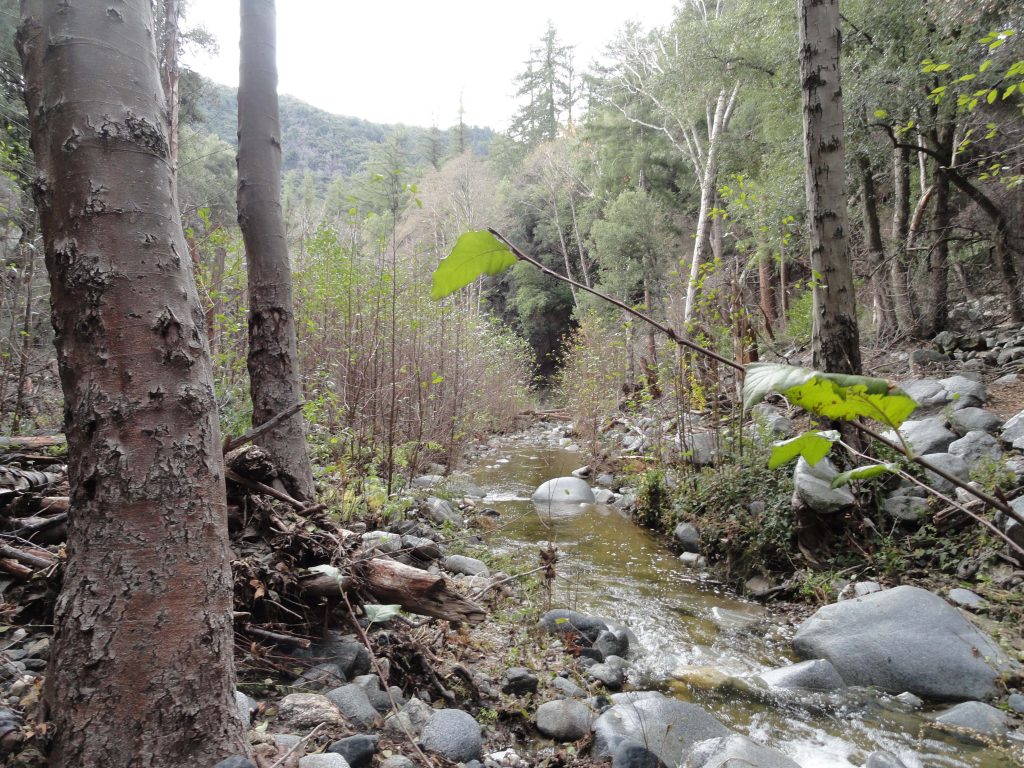 My feet were already damp from all the crossings by the time I arrived at West Fork campground.  A few folks were camping here as I wandered over to the site of the first ranger station in California.  Now only a 1950′s era Daughters of the American Revolution monument marks the place where Louis Newcomb hewed his ranger cabin back in 1900.  You can still see the reassembled cabin at its’ relocated spot adjacent to the Chilao Visitor Center up Highway 2, not far from Newcomb’s Ranch.

Now the work was to begin….  Rush Creek joins the West Fork just to the east of the campground.  Wet blackberry bushes, stinging nettles and thickets of young alders marked the beginning of the canyon.  The elevation gain to the top of Mt. Wilson is close to 2,700′ in less than two miles of bouldering. 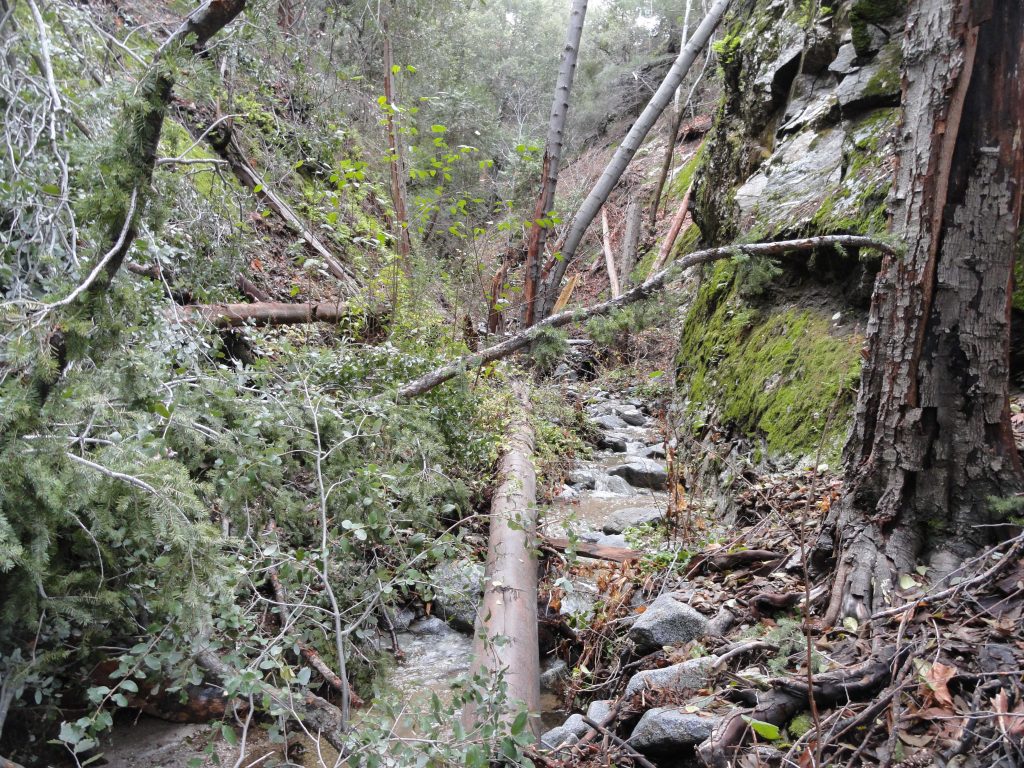 Rush Creek is true to its’ name!  The stream fell rapidly over a myriad of small waterfalls and cascades, punctuated occasionally by a few yards of calm and gentle descent.  The canyon bottom, like most in this part of the front country, was mostly narrow and fringed in mosses and ferns.  It seemed that most of the rock surfaces were damp and slick, which added an ice-like slickness to my challenges.  However, if you take your time carefully choosing your route up and around the small waterfalls and cascades, there’s no need for ropes or any climbing hardware.  Just take your time, which is what I did. 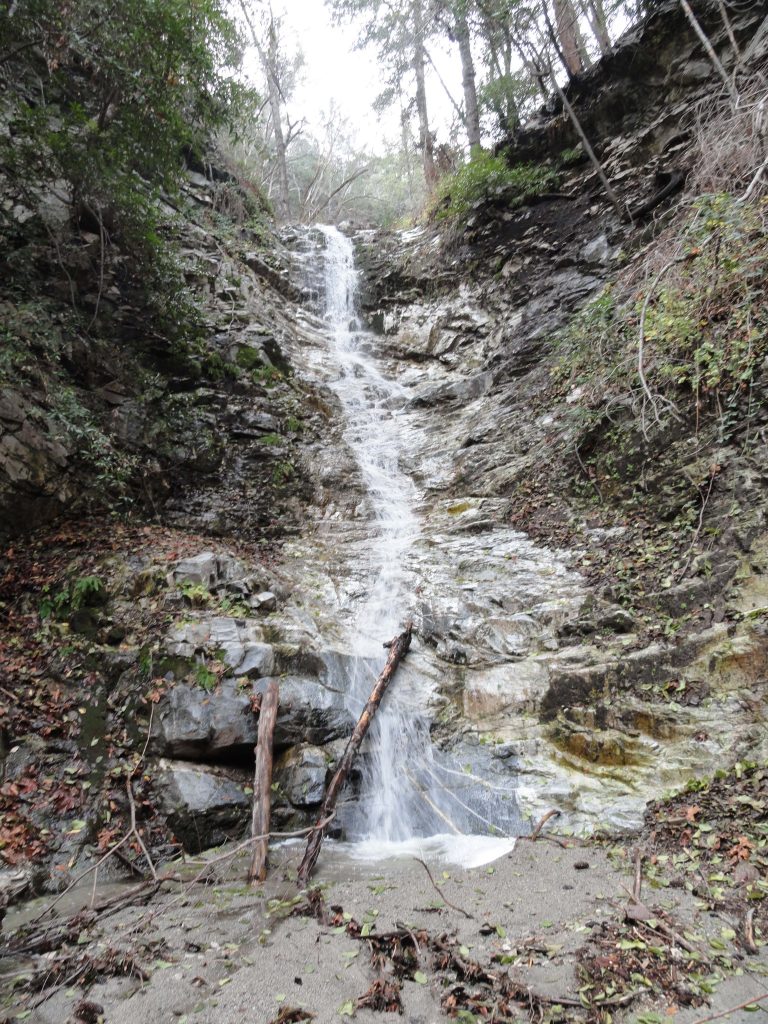 Tumbling Rush Creek Falls. It’s about thirty-five feet high. I climbed to the left of it. 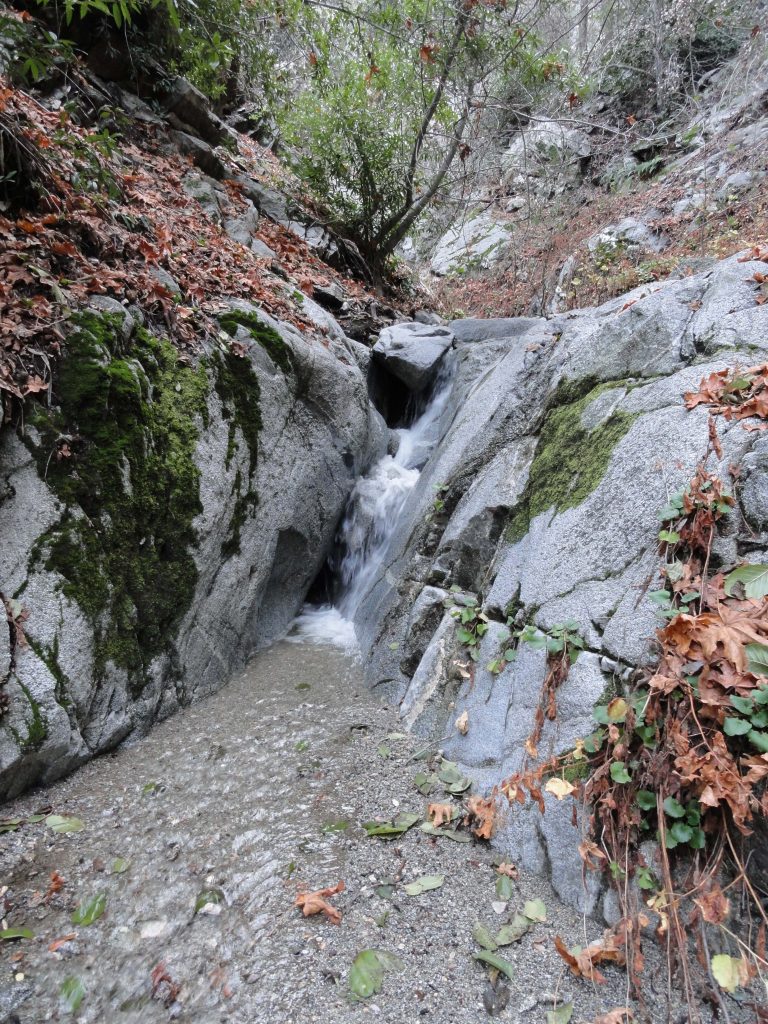 Water falling through a slot about half way up Rush Creek.

A little better than half way up, I had to choose a canyon for my final route to the top of Mt. Wilson’s eastern end, not far from the 100” telescope dome.  Eventually I chose a fork toward the left which turned out to work out fine.  Like all x-country approaches to Mt. Wilson, the semblance of a canyon soon morphs into sandy, steep slopes pocked with rock outcrops and exposed tree roots which are great for hand holds at times.  It took from about 9:40 a.m. to 2:30 p.m. to make the trip between the mouth of the canyon to the top.  It was both exhausting and exhilarating, with grand views out toward Twin Peaks and Mt. Waterman in the back country.   The flat, gray wintery light filled me with thoughts of past Christmas-time hikes and those who I had shared them with.  Here and there in the shadows, amongst the towering Big Cone Spruce, incense cedars and sugar pines, memories of my brother Nick kept following me up Rush Creek.  At one point earlier in the day, along the West Fork between DeVore and West Fork Camp, I saw the spot where he and I had been hiking one autumn years ago and had stopped for a photo in the fallen maple leaves.  I could still see him leaning against a scraggly tree in his relaxed lean, pack still on.  Nick passed away last January 9th from complications of chronic kidney disease.  He’s a couple of years younger than me, which on a number of levels has made his early passing even harder to bear.  Somehow this canyon had become the place, so late in the year, with her peaceful greens and grays, which allowed me images of my brother, thoughts of him, to flow quietly through my being.  A calm healing had been seeping into me throughout the ascent of Rush Creek, one like I had not experienced until now.

This thought kept tumbling through my head, “our time here on this earth is brief under the best of circumstances.”   Just keep on climbing and you’ll be at the summit and so will he.  So, the rest of my ascent had become a pattern of short scrambles, searching for stable footholds, letting my heartbeat slow down and starting, again. 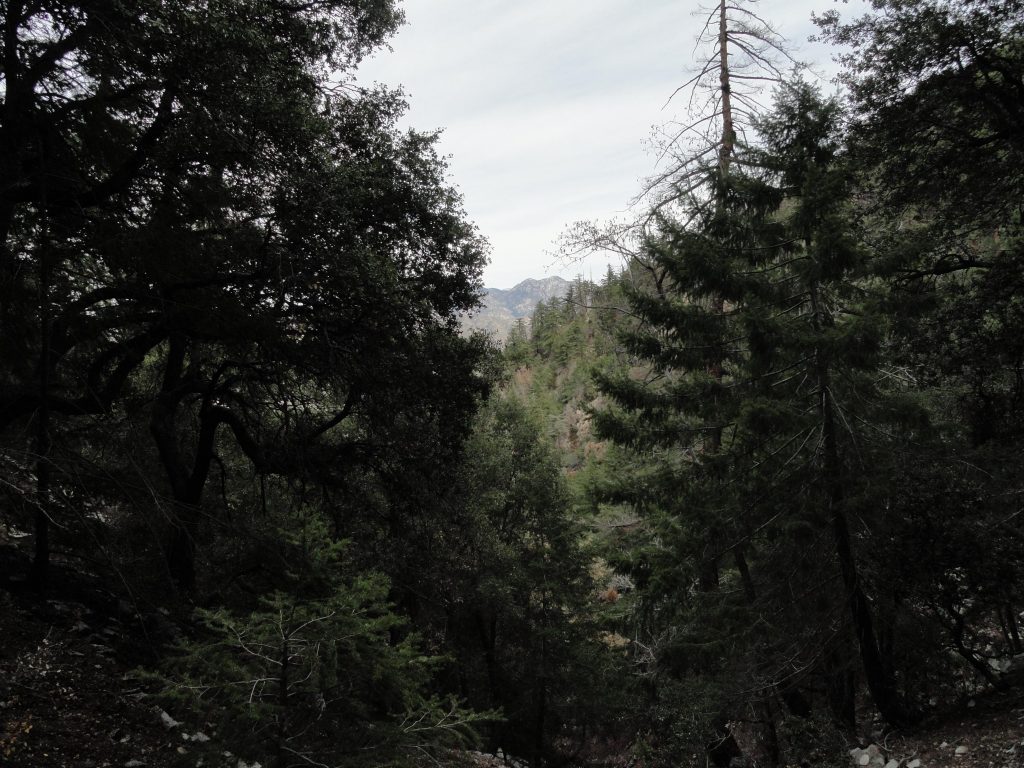 Peering out at Twin Peaks from upper Rush Creek. Here the forest is lush, green and healthy.

Eventually I topped out into a forest of scrub oaks, following a gentle ridge to a lonesome picnic table along the Rim Trail.  My eyes were damp.  Like most of my x-country hikes, I found myself wondering where this canyon had been all my life.  Soon, my soaked shirt had begun to turn to chill, so I changed into a dry top, had a little cheese and pita bread sandwich and kept on walking in the dimming light.

The return back to the little cabin in the Big Santa Anita was by way of the superbly scenic Rim Trail which parallels the ridge dividing the watersheds of the West Fork of the San Gabriel and the upper Big Santa Anita Canyon.   The distance from Mt. Wilson to Newcomb Pass is a relaxing descent of 3 1/2 miles if you take this route back toward Chantry Flats.  The sunset was stunning and soon I had the

flashlight out for the rest of the trip back to Fern Lodge in the Big Santa Anita Canyon.  Soon I began to pick up the pace, trying to beat the impending darkness.  A calm peace ran through my bones as I headed toward Newcomb Pass and then down toward Sturtevant’s Camp.  You know, the fantastic way you feel when you’ve gotten in miles and miles of canyons and ridge tops, before you arrive where you can take off your boots and stay awhile.  My old friend Bohdan greeted me in the dark near Falling Sign Junction and we hiked together back to Joanie and the warm, lit cabin with dinner on the stove.  This day was more than good. 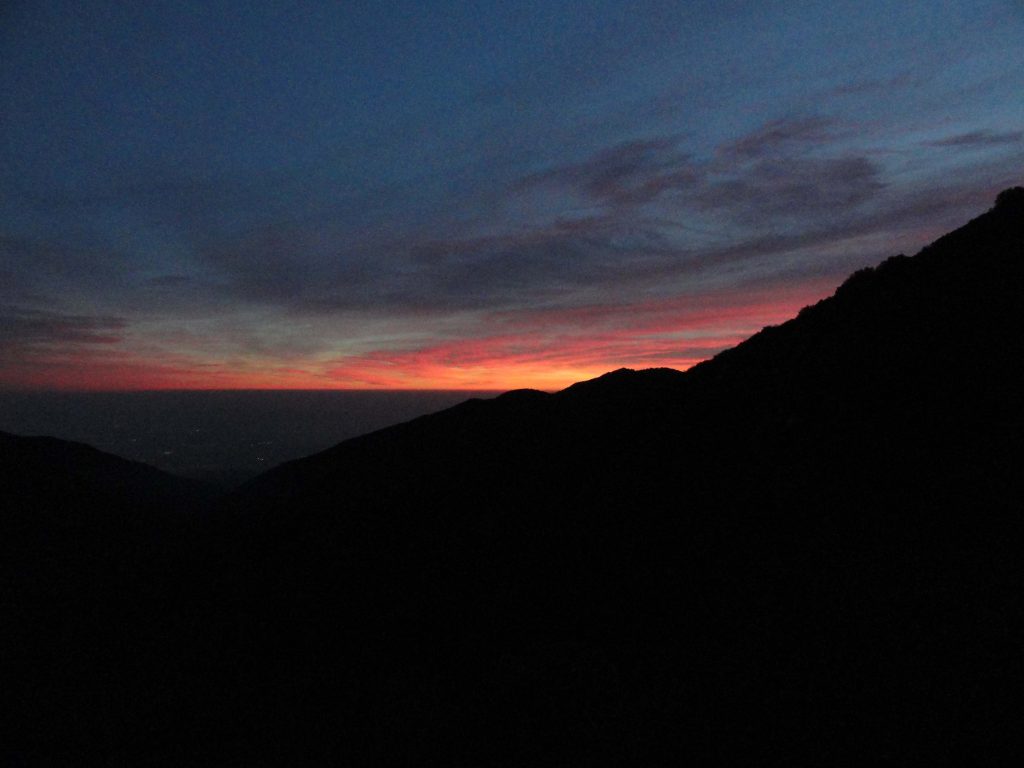 Sunset from the Rim Trail between Mt. Wilson and Newcomb Pass.