Skip to content
Posted on August 16, 2013 – Written by Chris Kasten

The Big Santa Anita Canyon crank telephone system is coming back to life!  While hiking or biking the Chantry Flats hiking trails, you’ll see the old wooden call boxes in various places such as Fern Lodge Junction, located near Sturtevant Falls.  There’s a working crank telephone in each of the nine boxes.  Earlier this year, I was invited by the Permittees Association to provide a survey of the existing phone system that had been in disrepair for several years. Following the survey, I estimated what it would cost to bring it back to full operation. 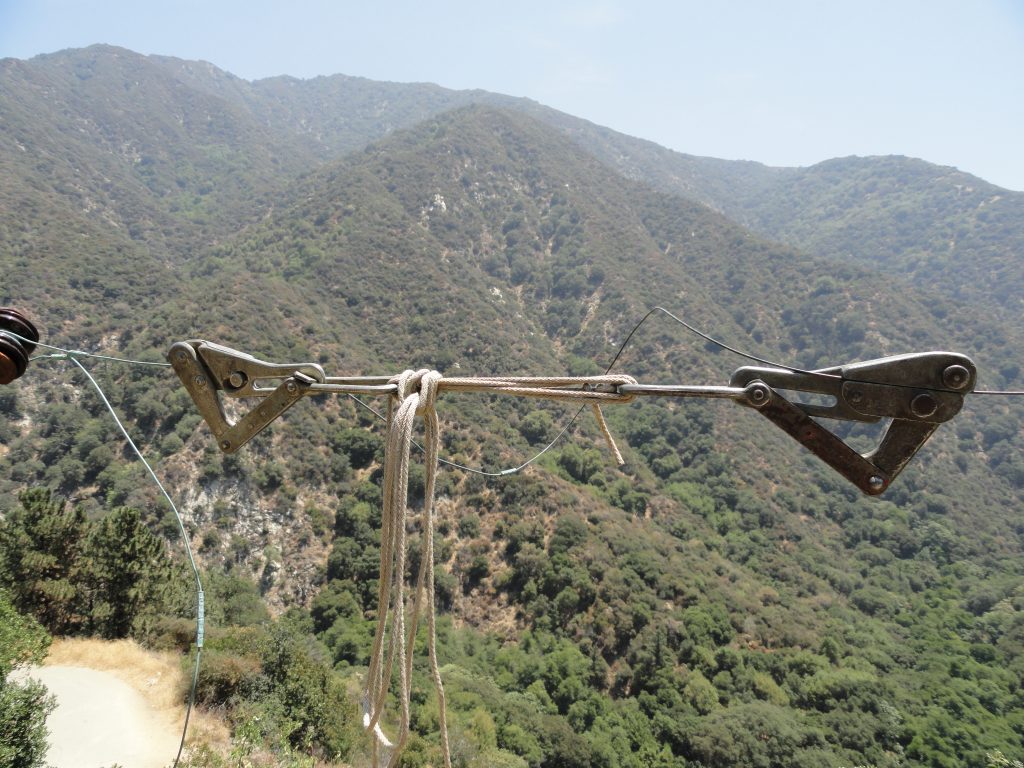 The line puller securely pulls the two ends of the phone line together before splicing.

The decision was made for me to give it a try. So, back in April, the rebuilding began by driving a single 8 foot long ground rod at call box #1 down at First Water, below Roberts’ Camp. Since then, each week I spend a day re-connecting broken stretches of phone line, reattaching insulators to tree trunks, re-establishing grounding and basically getting the line back up off the earth and plants. Everything goes back to nature, especially six miles of wire under a forest canopy.

A description of the phone system, its’ origin and how it works can be found on a previous blog of mine, “What’s That Copper Wire? Chantry Flats’ Crank Telephone System” – dated Sept.14, 2012, page 2 on this website. Much of the work that’s been accomplished so far has been getting the phones working between the Pack Station at Chantry Flats down through First Water and then up canyon to Sturtevant’s Camp. Also, repairing the line up through the Winter Creek to its’ terminus just upstream from Hoegees’ Campground. A number of private cabins and public call boxes are now connected to the phone system as well. 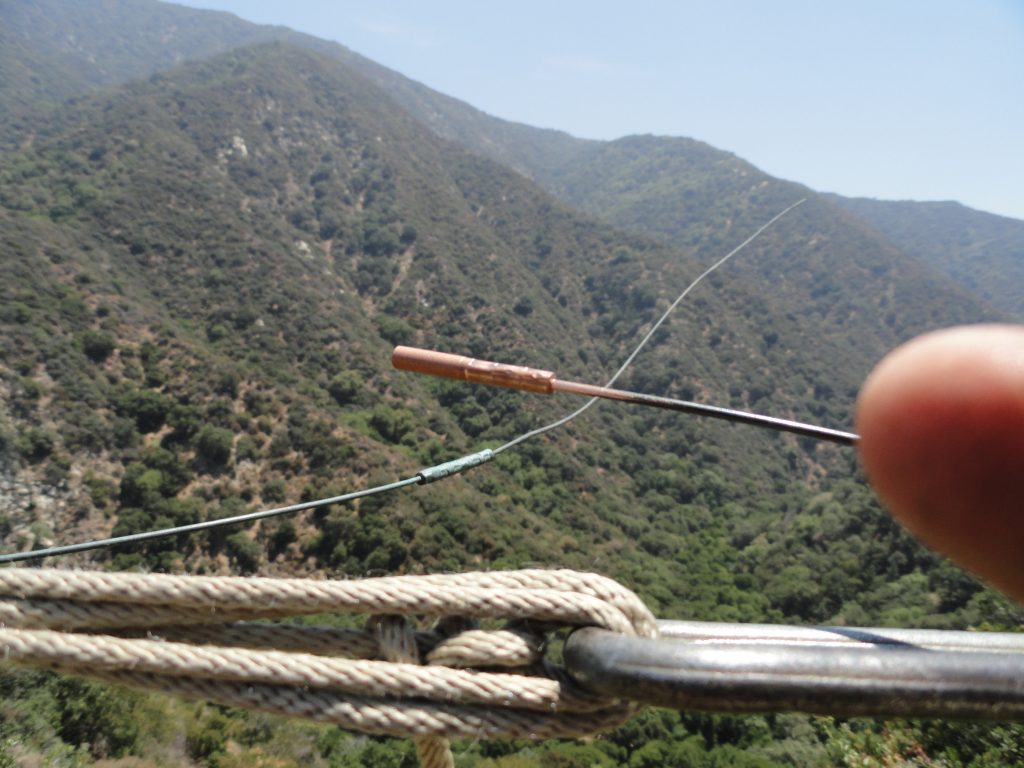 Re splicing the phone line using a line puller.

These accompanying photos show in detail how the phone line is connected using sleeves and a crimper, as well as how to hold two pieces of wire together using a line puller. You’ll notice that there’s only one wire here. The return wire is the old earth herself. So, each phone location must be grounded for the circuit to be complete. 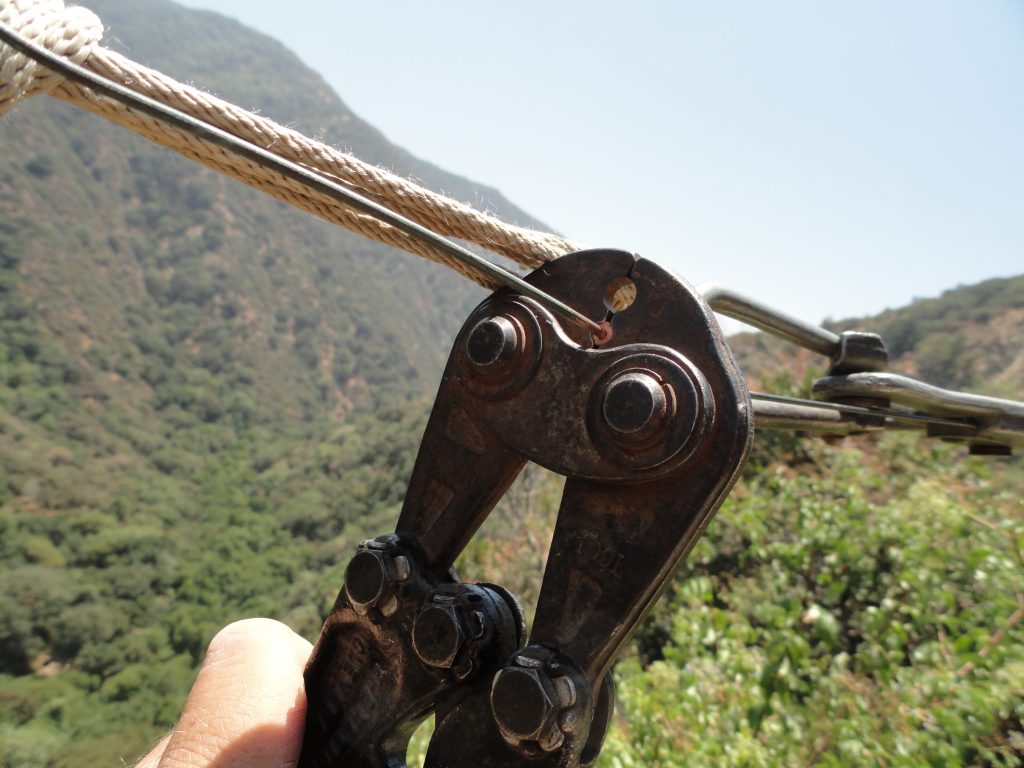 The way to get up to the wire is to either make a cut where you can reach it from the ground, removing its’ tension and letting it lower down through the split ceramic insulators, or to climb up a tree or pole using an extension ladder. I often carry an extension ladder when out working on the line. On one level it’s a bit cumbersome, yet it’s easier on the tree than using climbing spikes. Also, I make a point to remove wire that’s been wrapped around tree trunks for attaching insulators, thus liberating them from this stranglehold. Small eyebolts are used instead of wire, allowing the tree to grow as she will.

Next time you’re out and about in either the Winter Creek or the Big Santa Anita Canyon, see if you can find the blue-green copper wire running from tree to tree. If you should encounter an emergency, i.e. medical, fire or someone’s lost, use one of the nine call boxes located along the trails. The directions on how to use these crank telephones can be found on the inside of each call box. You never know who you might just be helping.