Skip to content
Posted on August 19, 2015 – Written by Chris Kasten

If you’ve decided to pack a Chantry Flat Map, it’s important to have an orienteering compass along for your trip.  One of the key advantages of carrying a compass is the ability to orient your map to the landscape and 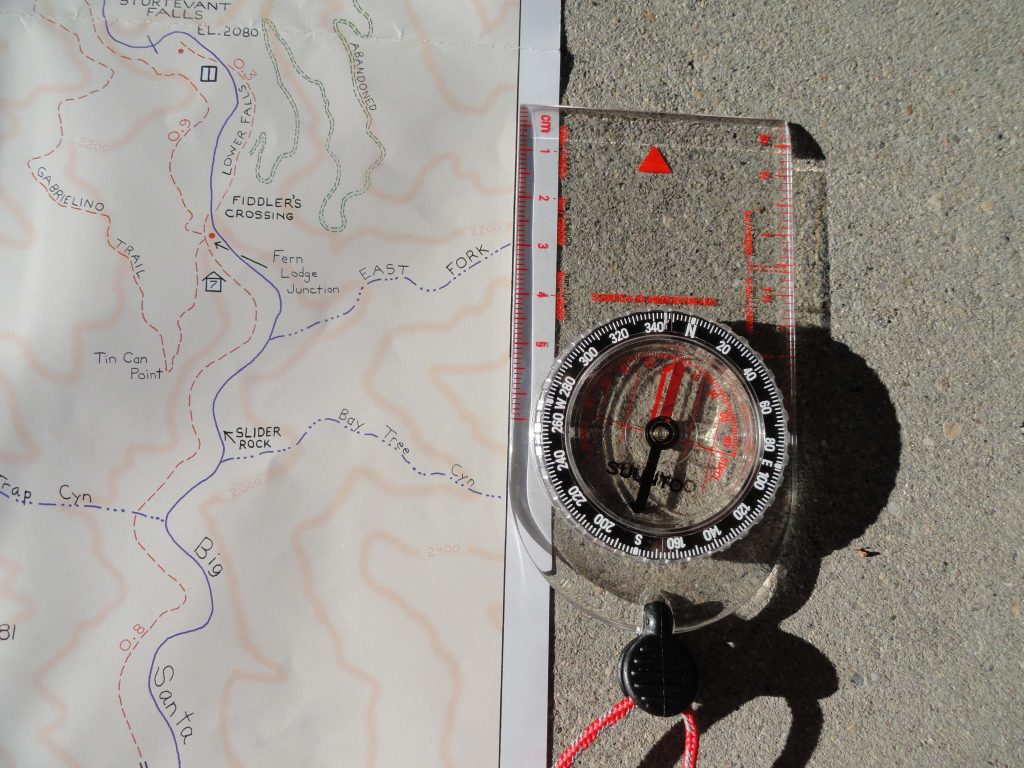 Align orienteering compass to map’s neat line for getting your map synchronized with the land. This placement of getting the map “right” with the earth is the first step in seeing where you are in the greater picture of things.

to ultimately discover just where you happen to be within the confines  (neat lines) of the map’s image.  Knowing where you are on any map while out hiking or biking adds greatly to your confidence in traveling the trails between Chantry Flats and Mt. Wilson. The orienteering compass you see here is inexpensive and requires no batteries.  If you travel with GPS, bringing along a compass, as well, might be a good back-up.  If you travel with your smart phone,  utilizing the north arrow function will suffice as well.  Just make sure that you line up the edge of your phone with the map’s north-south neat line as shown in the image to the left.  Rotate the map & phone together to “sync” your map to the landscape.  If you decide to buy a compass, they are available at most outdoor retailers, such as REI and Sport Chalet.

This orienteering compass is an essential item to pack when out hiking and biking on our local trails. It is inexpensive (approx. $16.00) and never needs batteries. Use it to orient your map to the lay of the land, as well as locating where you are within the map’s image

The key challenge that most travelers have in using an orienteering compass is dealing with the concept of declination.  Declination is the magnetic, angular difference between the earth’s geographic north pole and the “magnetic” pole, located well north of Hudson’s Bay, Canada.  The compass needle naturally points toward the magnetic pole.  To get your map to synchronize with the earth, the north-south edge of your map has to be parallel with the north to south lines of longitude on the earth’s sphere.  So, how do you make this happen?

For areas in the front-country of the San Gabriel mountains, specifically Chantry Flats, there’s about 13 degrees of difference between the geographic north pole and the magnetic pole.  Looking at the detail of the compass dial photo, you’ll see that instead of 360 degrees being lined up with the index mark (North), 13 degrees of declination have been subtracted to equal just about 347 degrees, instead.  This is an easterly correction that works for all of California, with an increase as you head north, say in the Sierra Nevada range.  Just twist the dial to the right to make your adjustment. Next, slowly turn your compass, keeping it level as you can, until the red end (magnetized) of the needle is 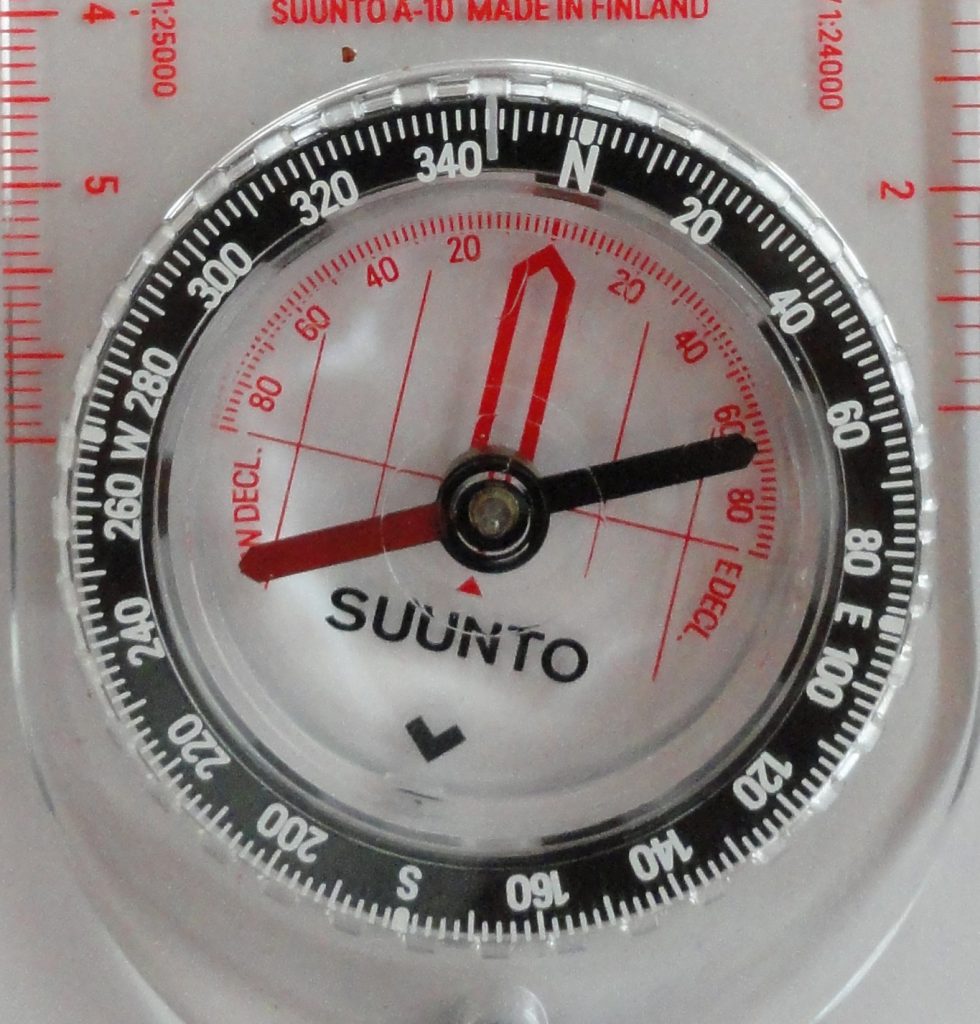 superimposed over the red outline within the dial’s face.  Once this is done, the edges of the transparent baseplate are now lined up with the north-south lines of longitude.  The top of your compass is facing north.  Now take your map and turn it to the point where the map’s edge, left or right side, are parallel with the compass baseplate.  Another photo shows you what this looks like.  Voila!  Your map is now oriented to the actual mountains and canyons of Chantry Flats and Mt. Wilson.  Often, just doing this, will make a huge difference in determining just where you are on the map. In the next article, we’ll go over how to sight on an object, such as a mountain top, and determine just where you happen to be on the map. 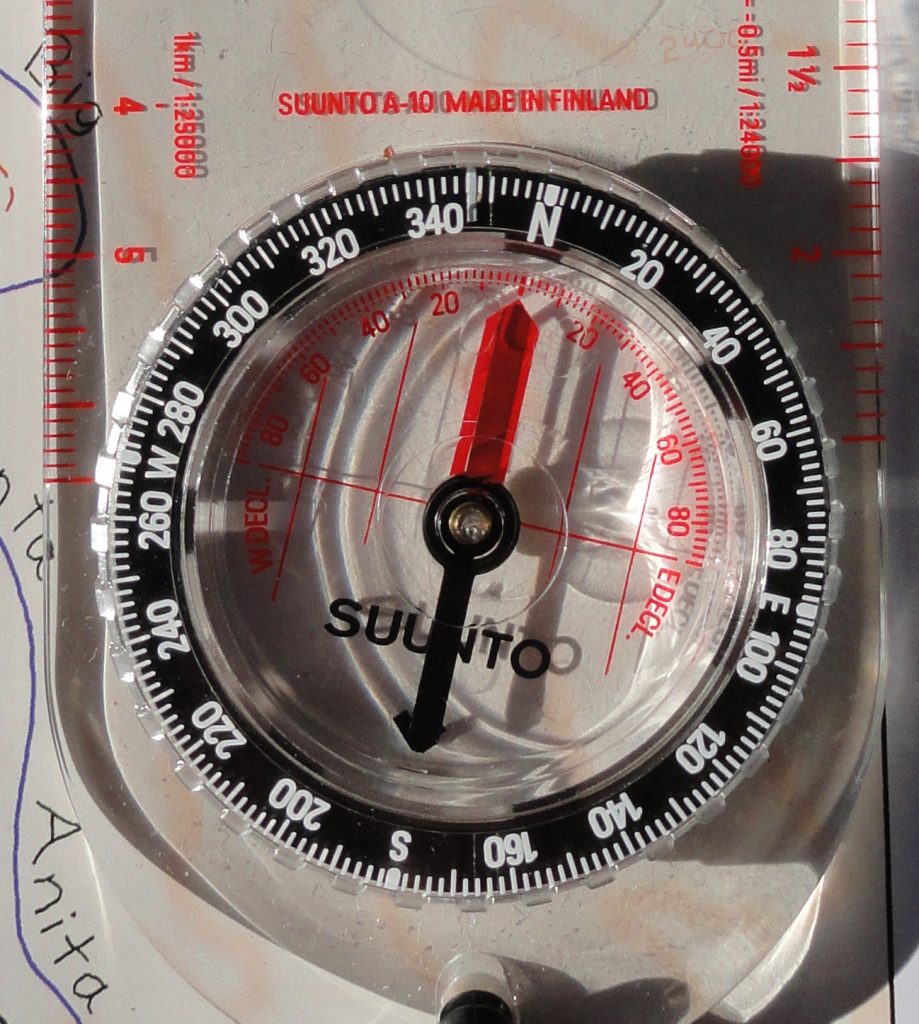 Compensating declination for true north is accomplished by aligning the compass needle with the red outline inside the dial. Notice how needle is directly over this outline. Good!