Skip to content
Posted on February 19, 2016 – Written by Chris Kasten 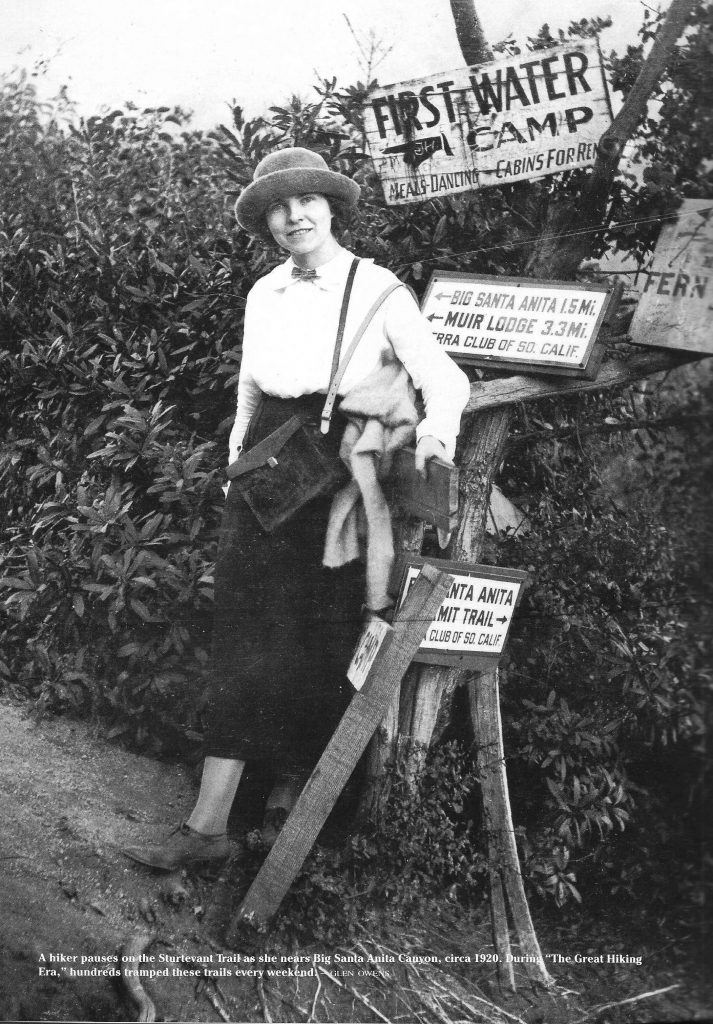 This image was scanned from John W. Robinson’s “The San Gabriels.” A young lady stops for her photo at the First Water Junction on the Sturtevant Trail, not far from present day Chantry Flats. 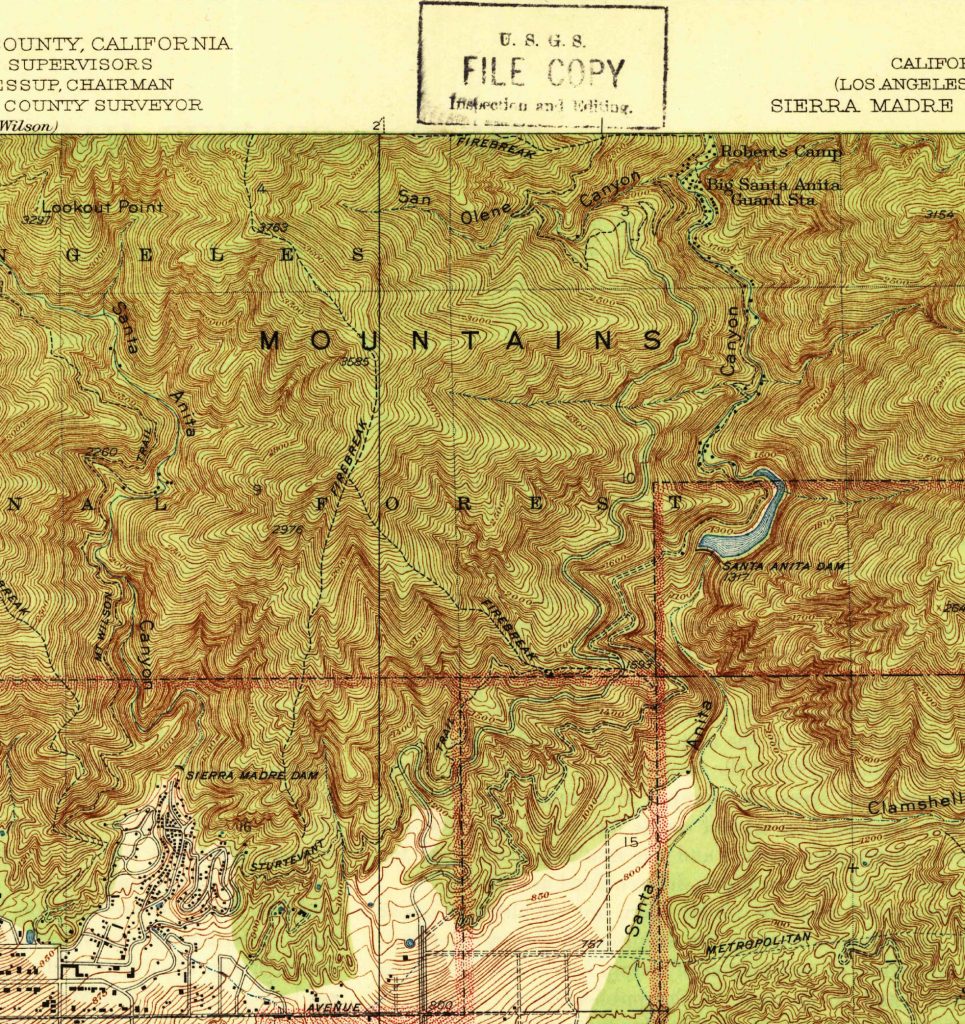 Historic topographic quadrangle from the 1930′s.

Following the old Sturtevant Trail toward Chantry Flat today, is to put it lightly, a challenging and slow-moving proposition through thick brush and steep rocky slopes.  Built back in 1895 by Wilbur Sturtevant and a cadre of other mountaineers of the time, this trail was once a main way into the Big Santa Anita Canyon during the “Great Hiking Era.”   What an amazing time this must have been, 1895 through the late 1920′s, when the mountains rang with the joyous songs of hikers traveling on the myriad of trails through the chaparral and under the spruce, oaks and maples.  Alternating through bright glades of sun drenched brush and cool, shady nooks of ferns and shade, the Sturtevant Trail made its’ way up from Chantry’s Store and Corum’s Pack Station in Sierra Madre  to Wilbur Sturtevant’s trail resort in the Upper Big Santa Anita Canyon.  Pack trains carried construction supplies to such places as Roberts’ Camp, Hoegees, First Water, Fern Lodge and Sturtevant’s, not to mention the construction sites of over 220 private little cabins that dotted stream side flats. 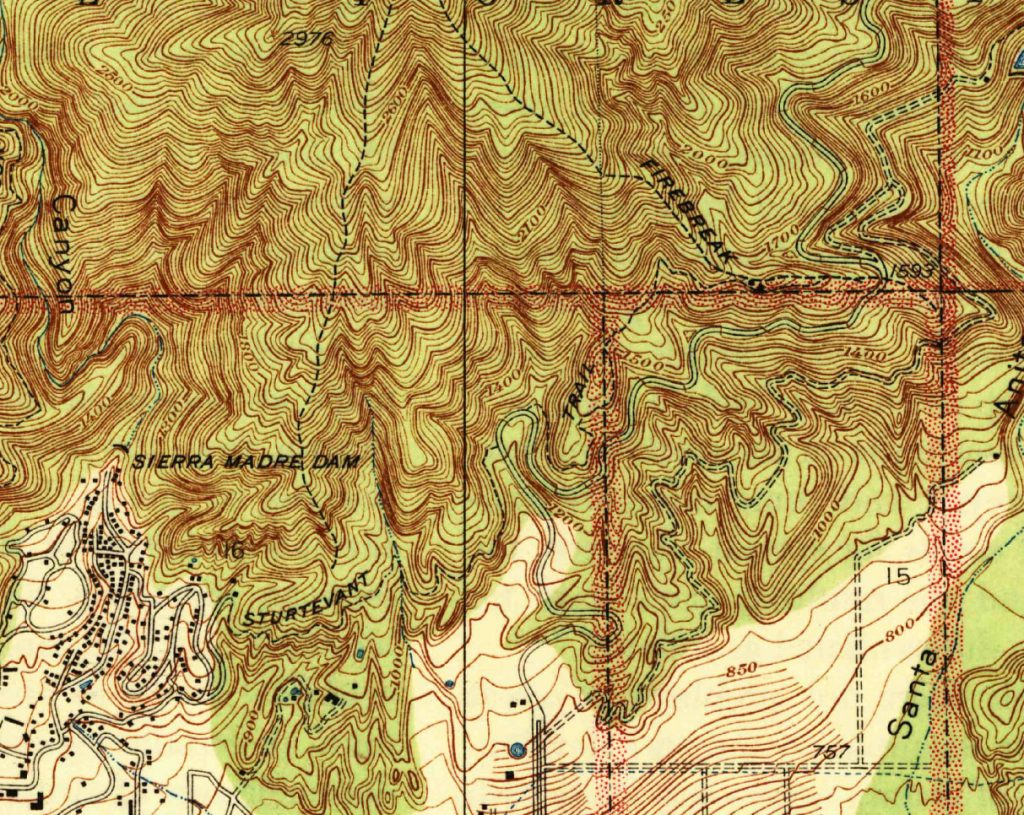 Detailed section of quadrangle showing the Sturtevant Trail. Notice that the trail does not show on map past boundary into Angeles National Forest.

Just last week, our friend Adrian and I, travelled on and along what remains of the Sturtevant Trail between Sierra Madre and to a point just beyond the current Arcadia communication site located near the Angeles National Forest boundary.  Eventually, as the shadows lengthened and our energies waned, we finally peeled off the trail through a thicket of poison oak and bright green grasses to the Chantry Road at a point just down from Sherfee Spring,  where our friend Canyon Dave picked us up, without having even having planned it that way!   Much of the travel was wading through great expanses of aromatic black sage.  The temps were unseasonably warm, the low 80′s, and thoughts of fat, black coiled rattlesnakes lurked in the recesses of my mind at times.  Of course, what we worry about usually never comes to pass… 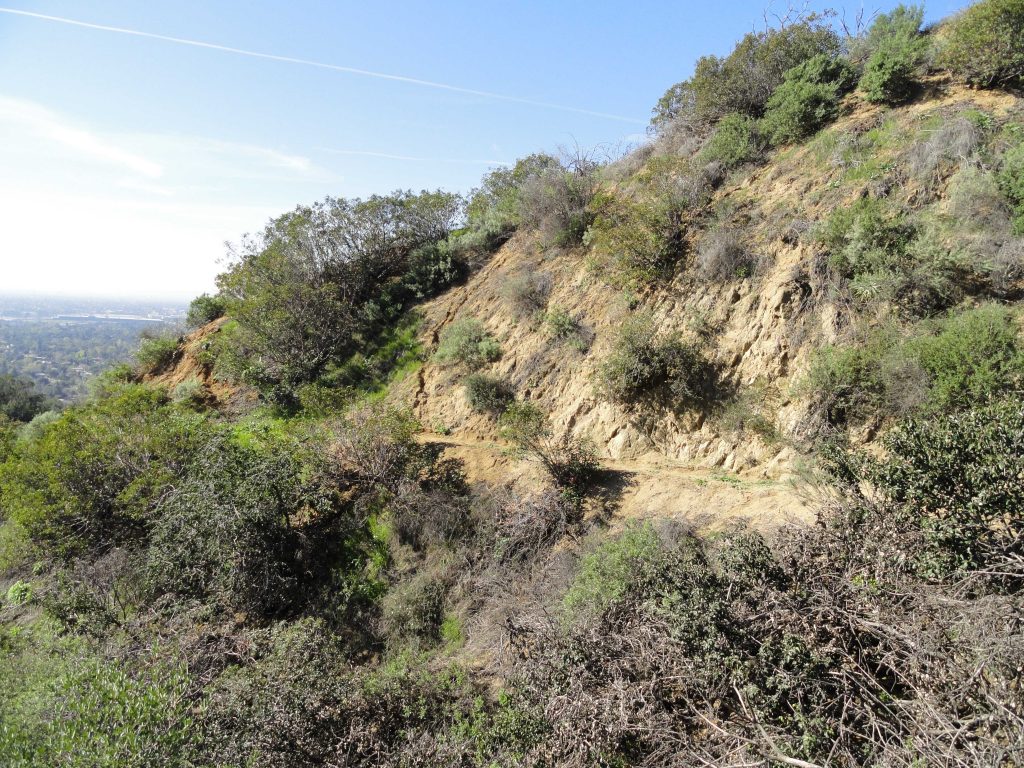 While much of the original trail or what I refer to as “tread work” was in place, there were just as many stretches of hillside along the way where any remains of the original tread had long since washed away. So we often found ourselves hiking up slope way more than we needed, searching in vain for the trail or in some cases, dropping far too low as well.  Adrian had calibrated his GPS to the historic topographic quadrangle that we had downloaded.  Sometimes the blue line from the GPS showed us to be directly on the trail, while at other times we were far from the mark.  In the end, there was the ever present hunch or sense of where it might have made sense for the trail to have run.  And, sure enough, it would often reappear a bit further on.  Much of the terrain is loose and crumbly, while the chaparral was composed mostly of black sage, white sage, buck brush (wild lilac) and sumac.  The views are  expansive and we found ourselves with constant views of the Chantry Road between Sierra Madre and Chantry Flats, where at road’s end,  the trailheads, ranger station, picnic area and Adams Pack Station are located today.  Although we never made it the entire way out to Chantry Flats, the experience really did give us a sense of what the hike up from Sierra Madre would have been like back before the Chantry Road existed. 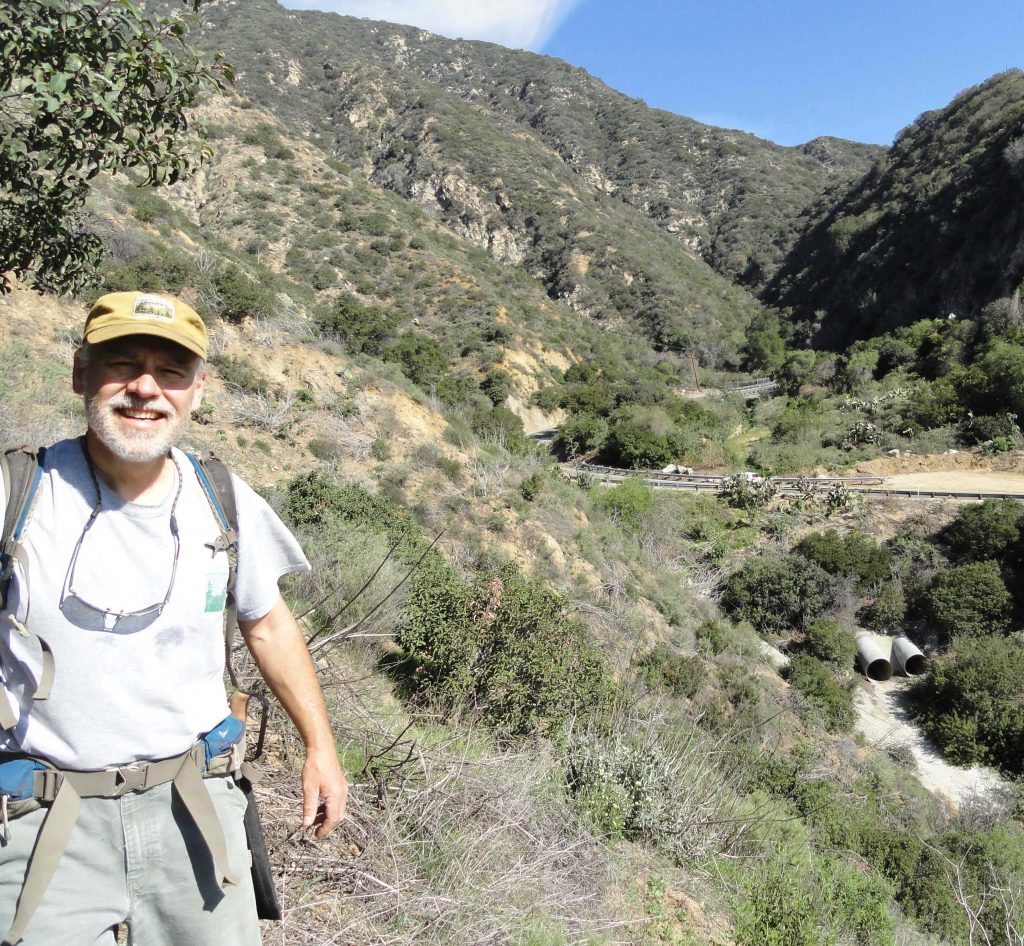 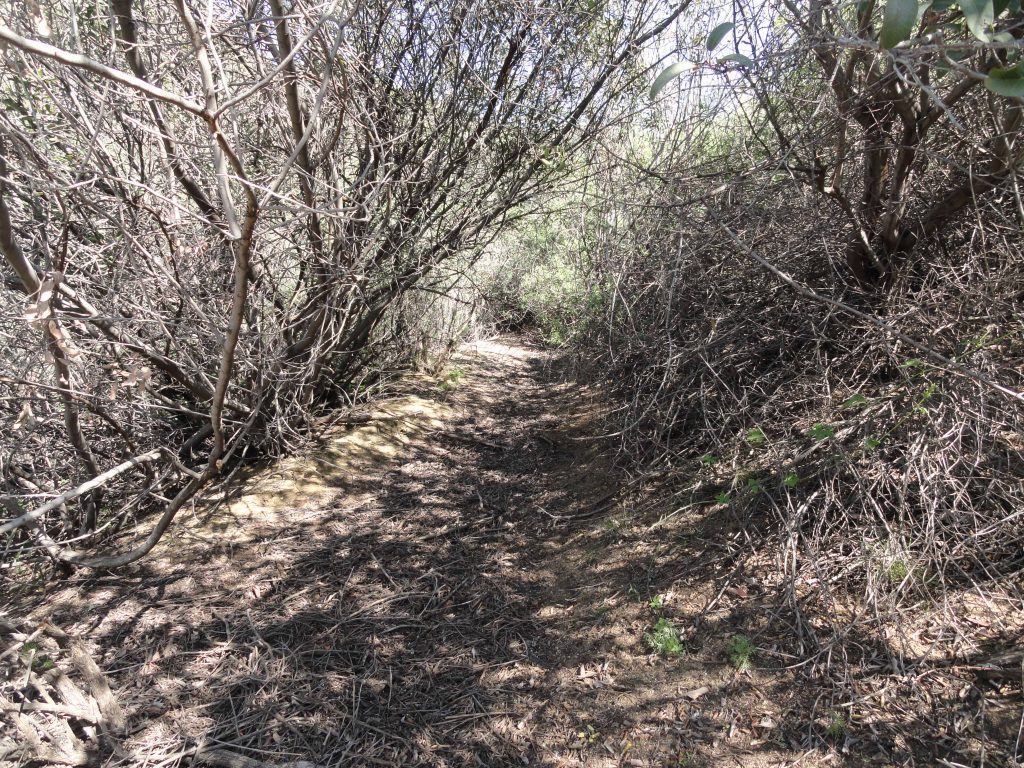 A wide piece of the trail’s “tread” is seen here under a tunnel of brush. We often had to crawl through places like this. 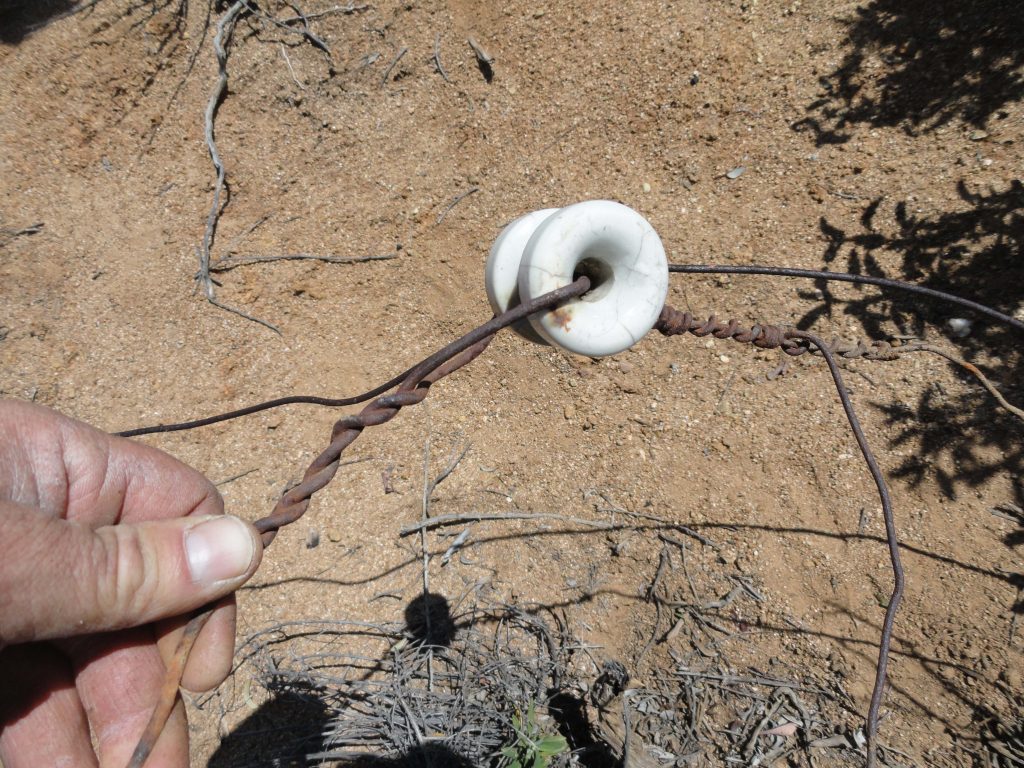 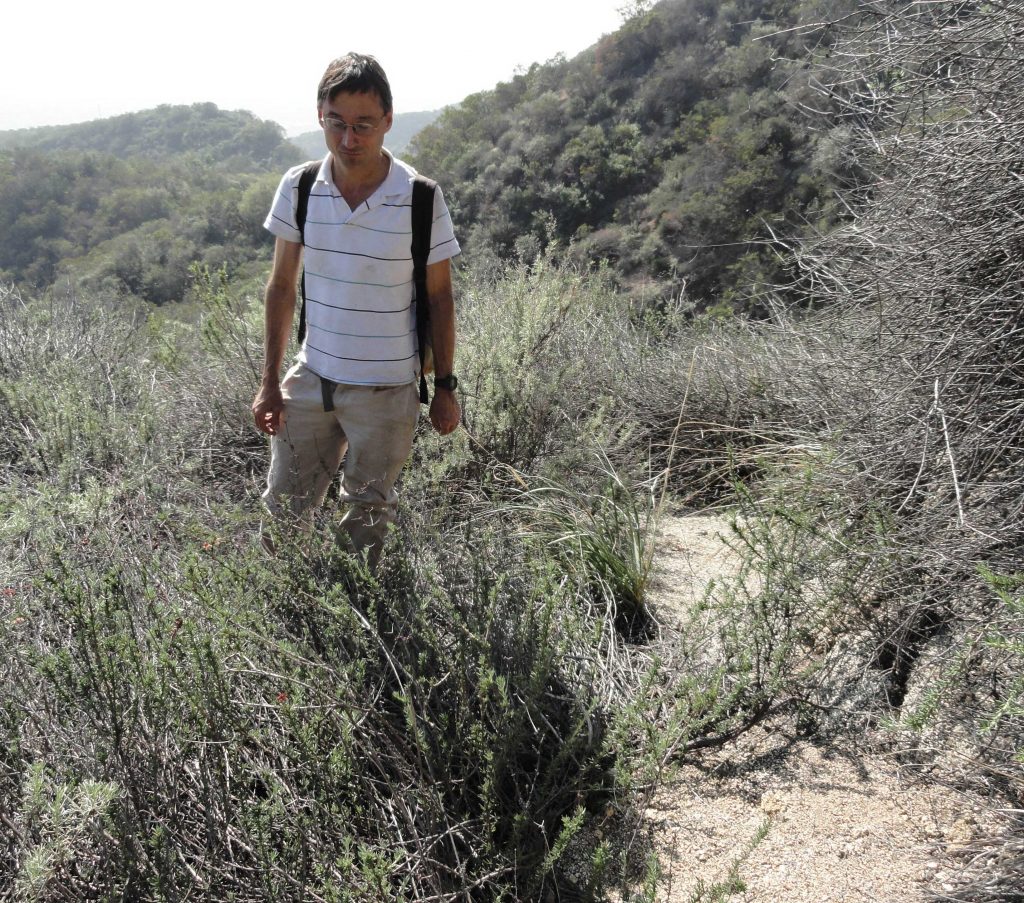 Adrian as seen on a piece of the old Sturtevant Trail not too far from Roberts’ Halfway Rest, now a communications site on the Angeles National Forest boundary.

Today, the old trail is slowly being reclaimed by the Earth.  Red tailed hawks circle amongst thermals on the warm, shaggy slopes.  Lizards and wood rats go through their daily routines amongst the forest of brush and scrub oak.   The plants quietly grow and blossom, season after season, filling the breezes with mingled aromatic scents.    Yet, if you’re quiet enough and get still, you can still sense the plodding of pack trains and laughter of hikers, seeking out good times in our mountains eternal.  Although the old Sturtevant Trail has been gone now between Sierra Madre and Chantry Flats for the last 80 years,  her traces still remain. 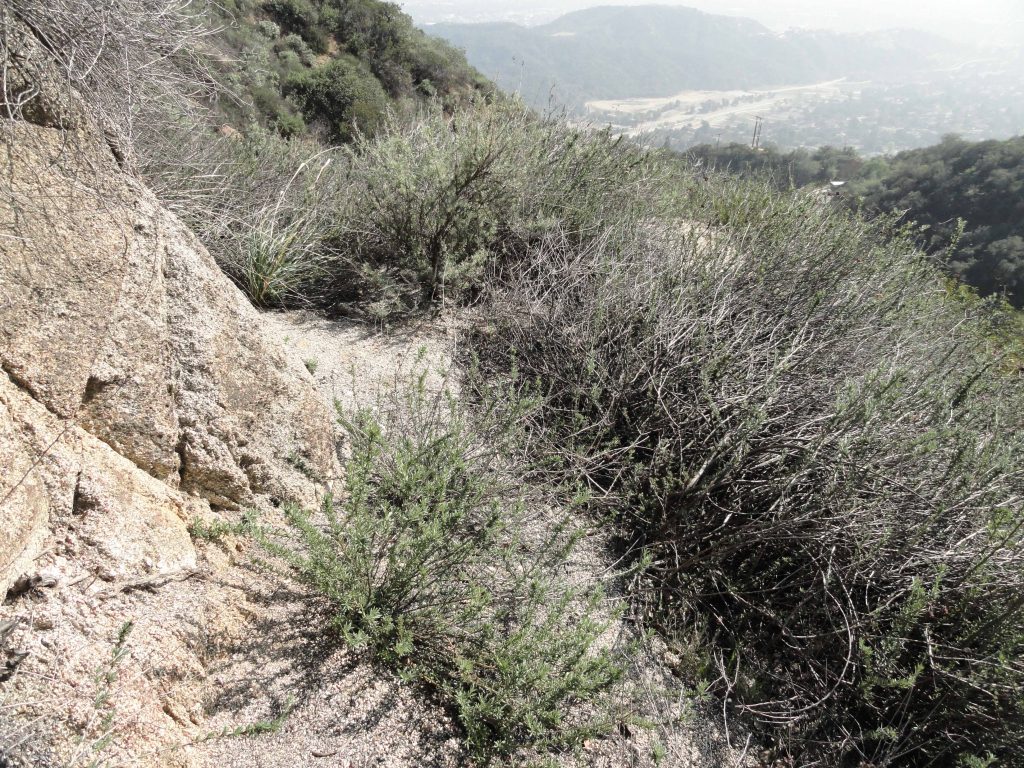 The Sturtevant Trail is still pretty intact as it makes this turn into a little side canyon between the Little Gray Inn and the Halfway House. 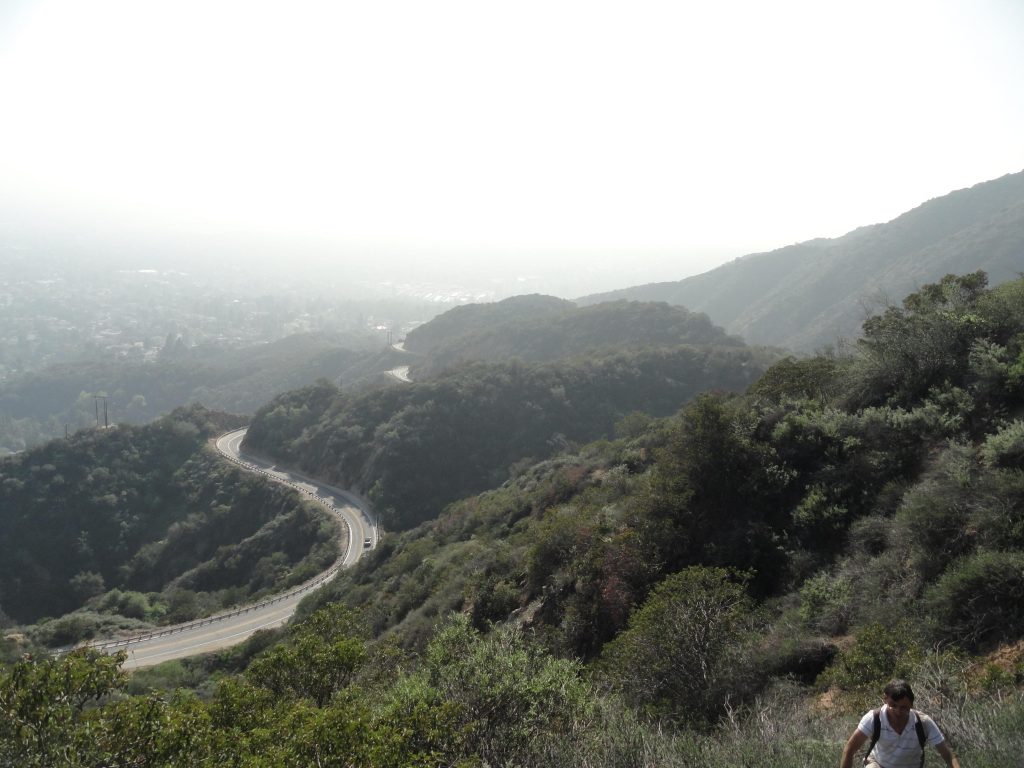 Looking back over the route that the Sturtevant Trail once took. That’s the Chantry Road winding below the old trail. 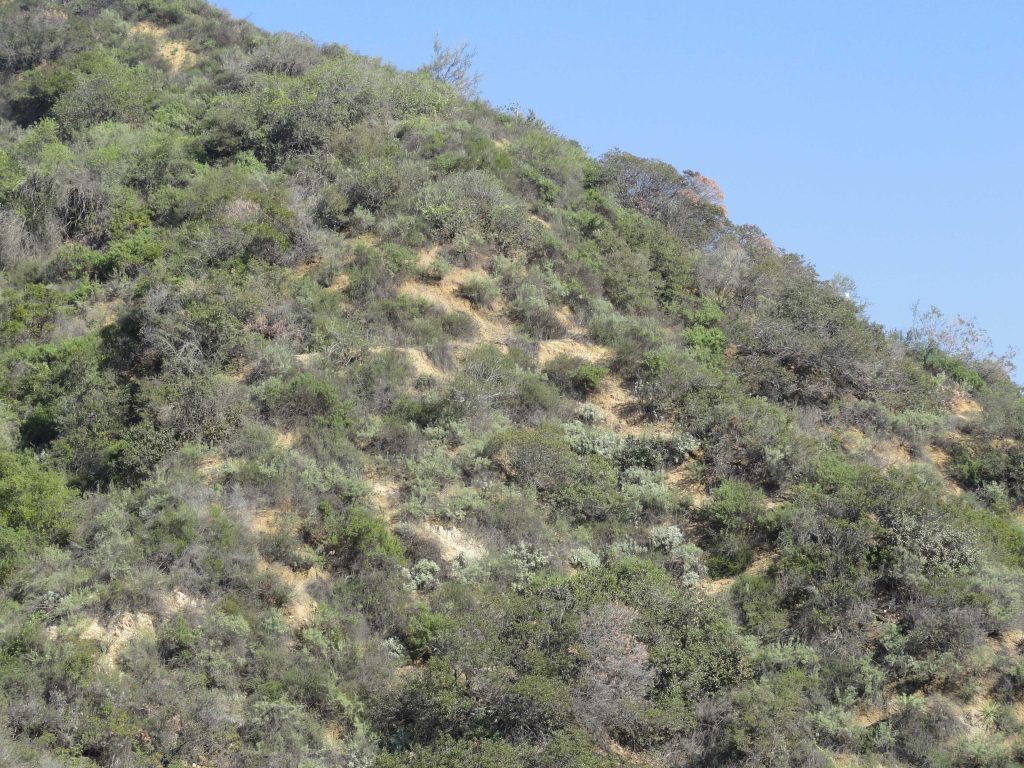 There’s only the faintest outline of the once busy Sturtevant Trail left on this chaparral cloaked slope. This spot is located just below the Halfway House.