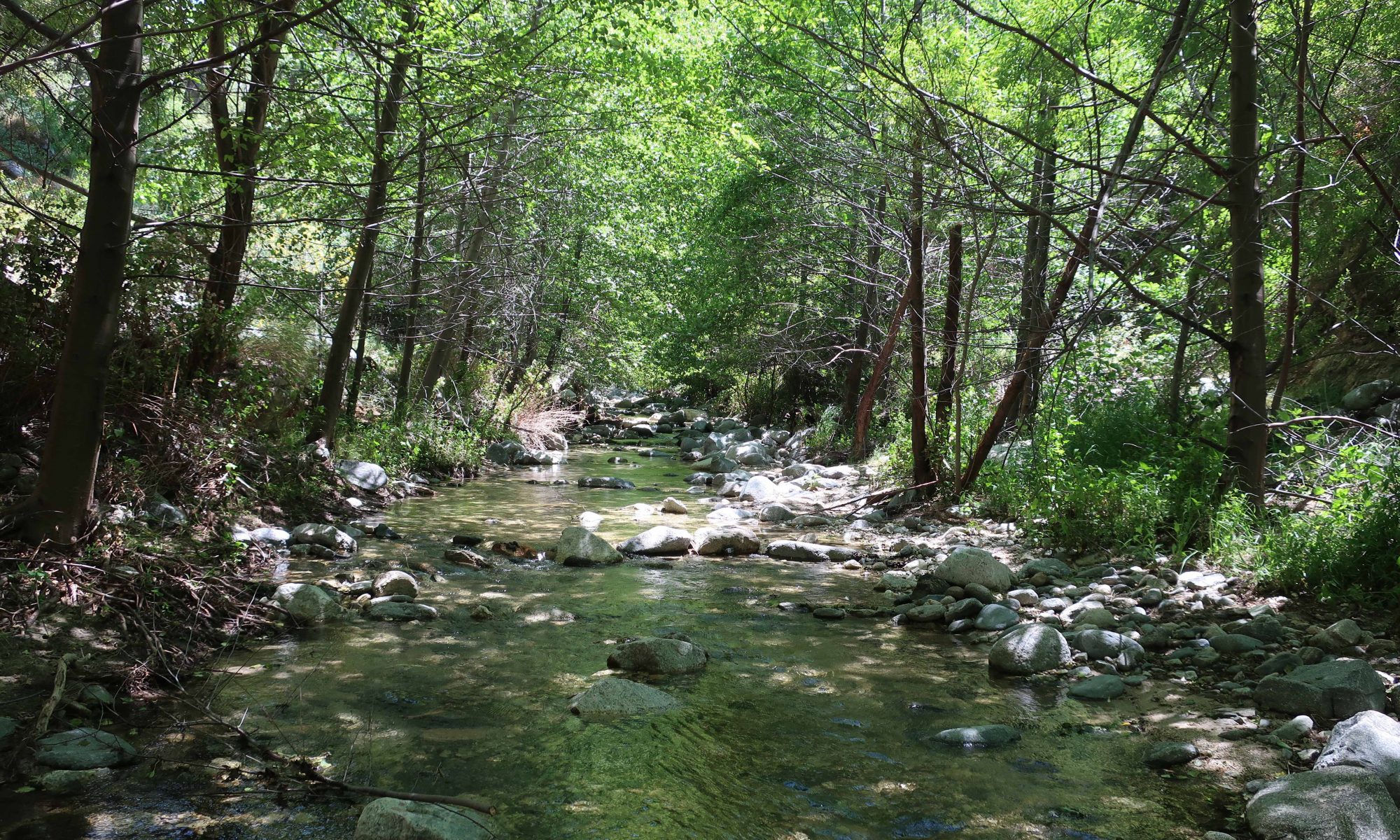 The Arroyo Seco’s Royal Gorge is a beautifully rugged, wild and trail less portion of the well-known canyon whose headwaters begin way up at Red Box and eventually emerges from the mountains near JPL in Altadena.   This hike samples a variety of landscapes.  The route requires hours and hours to complete, best done during the warmer months when days are their longest.  We actually spent 14 hours doing this trip, allowing enough time to take it all in.  If you’re looking to experience a bit of the old San Gabriels, a time before trails and roads left their imprint on the mountains, this deep canyon’s tranquil light and scenic pools will delight.

Elevation loss and gain = 1,180′ initial loss from CCC Ridge to Arroyo Seco via Dark Canyon.  1,500′ of gain from confluence of Dark Canyon and Arroyo Seco  at the site of Oakwilde to Switzer’s picnic area.

It’s highly recommended that you bring water shoes for the long slog up the stream bed of the Royal Gorge.  Also, I was glad to have brought trekking poles to help with balance in the gorge.  The rocks, even the ones underwater, often have a slime coat that’s slick as ice.  Take a dry pair of boots / shoes for the trail sections.

WARNING:  Your only real obstacle is a low waterfall in the Gorge.  There’s a slime coating on polished granite next to handholds and footholds.  This spot is technically class #3 bouldering, however, with the slime coat, you may want to consider carrying rope and bringing a hiking partner.

Start your hike by walking around the white pipe gate located where the CCC fire road comes out at the Angeles Crest Highway.  The hot, exposed road soon peters out and turns to single track as soon as you leave the ridge top.  The trail soon reaches the green canopy and watered bottom of Dark Canyon.  You’ll pass by some old cabin ruins with some really nice rock work that still stands.

Passing by black berry bushes and under a canopy of white alder, the trail stays with the little side canyon until reaching the broad sandy wash of the Arroyo Seco’s main canyon.   While here, it’s worth poking around the site of a former U.S. Forest Service campground – Oakwilde.   Once a thriving resort from the “Great Hiking Era,” the site became a backpacking campground, which I first spent the night at back when I was twelve years old.  Not much remains now, especially after the Station Fire of 2009 and subsequent flooding and debris flows.

From here, cross over the stream, picking up the Gabrielino National Recreation Trail.  Continue up canyon, the trail following the stream amongst willows and mammoth overhanging canyon live oaks.  You’ll find a solitary pipe frame from a picnic table that burned back in 2009.  This is the little site of Red Shangraw’s Rest Area.  Red was a U.S. Forest Service fire patrol officer who roamed much of the Angeles front country back in the late 1940’s to early 1970’s.  In a little while the Gabrielino will make a stream crossing.  It’s here where you’ll stay with the stream, allowing the Gabrielino to do it’s climb up and through the hot chaparral cloaked slopes, detouring around the Royal Gorge.

Stay with the stream.  As of this writing,  the water’s nice and high.  In most cases, you’ll find it easiest to just stick to wading up the stream bed itself, avoiding the inevitable thrashing through willows and brush.    Cliffs, many a couple of hundred feet high, drop dramatically down to the twisting narrow stream.  Once you’re in, this section of the canyon has you until emerging at the sight of the Bear Canyon Trail which’ll be off to your right after miles of wading and bouldering.

Bohdan and I actually ran out of light in the Royal Gorge, having to use our headlamps for nearly the last hour before tying in with the trail.  Stick with trail which’ll now take you up and along the pools of the Arroyo.  Eventually, you’ll come to the junction where folks head up to the base of Switzer Falls.  This turnoff is well signed, directing you up to the Gabrielino Trail and onto Switzer’s campground above the Falls.  At the spot where you finally meet back up with the Gabrielino, it’s a dry and exposed, quite high above the Arroyo.  Now you’re only a couple miles back up to your car.  It’s amazing how steep and cliffy the terrain downslope from the trail really is.  One misstep in a number of spots and that would be it.  Take your time, since you’ll most likely be a little tired by now.  Pass by Switzer’s C.G., continuing upstream as the canyon takes on a gentler nature.  You’ll walk along long gone stretches of a single lane road and retaining walls that nature’s reclaimed to herself as a hiking trail.  You’ll finally come to the end of your time with the Arroyo as you cross a substantial wooden footbridge at Switzer’s picnic area.  Since we’re still experiencing much of the Angeles N.F. camps and picnic areas closed due to the Corona virus pandemic, walk steeply up the paved, switchbacking road past the empty parking lots to the Angeles Crest Highway.

After this hike, you’ll always know another part of the Arroyo Seco that many will never see.