While out hiking, keep your eyes open for rattlesnakes.  Rattlesnakes have woken up in the Winter Creek, as well as in other canyons around Chantry Flats.   As the spring days continue to lengthen and temperatures rise, reptiles of all kinds are coming out of their seasonal slumber. From subterranean dens to sun bathed rocky hillsides and canyon bottoms, these creatures are back among the mammals, birds, insects and fish.

I encountered this Southern Pacific rattlesnake (crotalus helleri) while out on the Lower Winter Creek Trail this last Saturday.  Rattlesnakes are naturally secretive and will avoid human encounters if given the chance.  They are good mousers, helping to keep the rodent population at a tolerable level.  Like all living creatures, they need to be respected and protected from harm.  The creature in this photo had just signaled her alarm, giving me a quick wake-up to give some distance.  This is one reason why it’s a good idea to not have ear-buds in your ears while hiking or running, drowning out nature’s communications.

All of the front country of the San Gabriels are warming up, especially here along the Chantry Flats Trails.    Days are lengthening, grasses are drying out, stream flows are lessening and the lizards and snakes are on the rise!  There’s so much to see.  And to smell…. The fragrance of last year’s decaying leaves in the loamy stream bed’s sands is at times pungent  or mildly in the back ground of your senses.  This “signature” scent is throughout all the deep, steep canyons of our range.   Anywhere you’re in the Angeles National Forest, perhaps on a waterfall hike, organic reminders of our earthy platform that all life springs from.   White alders are fully leafed out, their canopies swaying lazily back and forth in the breezes of warmer days.  Bright greens of leaves and blue sky mingle together above us as the old earth tips more and more northward with the promise of longer days.

At our feet, creatures are wide awake and stirring about.  The lack of winter rains has in some way been a catalyst for our Spring season changing to Summer in a few short weeks.  Take time to look down at this miracle all around our feet.  Snakes and lizards make good use of camouflage to blend in with their native surroundings, so take your time and be still. The top image of the rattlesnake was taken after I almost stepped right on it by accident while alongside a cabin just below Sturtevant Falls.  You can see how well it blends in with the fallen oak leaves.  The lizard image was taken on the side of a cabin wall near the East Fork of Big Santa Anita Canyon.
These insect eaters are agile climbers on the textured rock surfaces.  The bottom image is of a mature gopher snake that has just recently shed its’ skin.  These non-venemous snakes are often incorrectly identified as rattlesnakes.  Gopher snakes constrict their prey, which consists primarily of mice and other small rodents.  While out hiking, stop once in awhile to look and listen to all the small miracles happening all around you.  You’ll be glad you did. 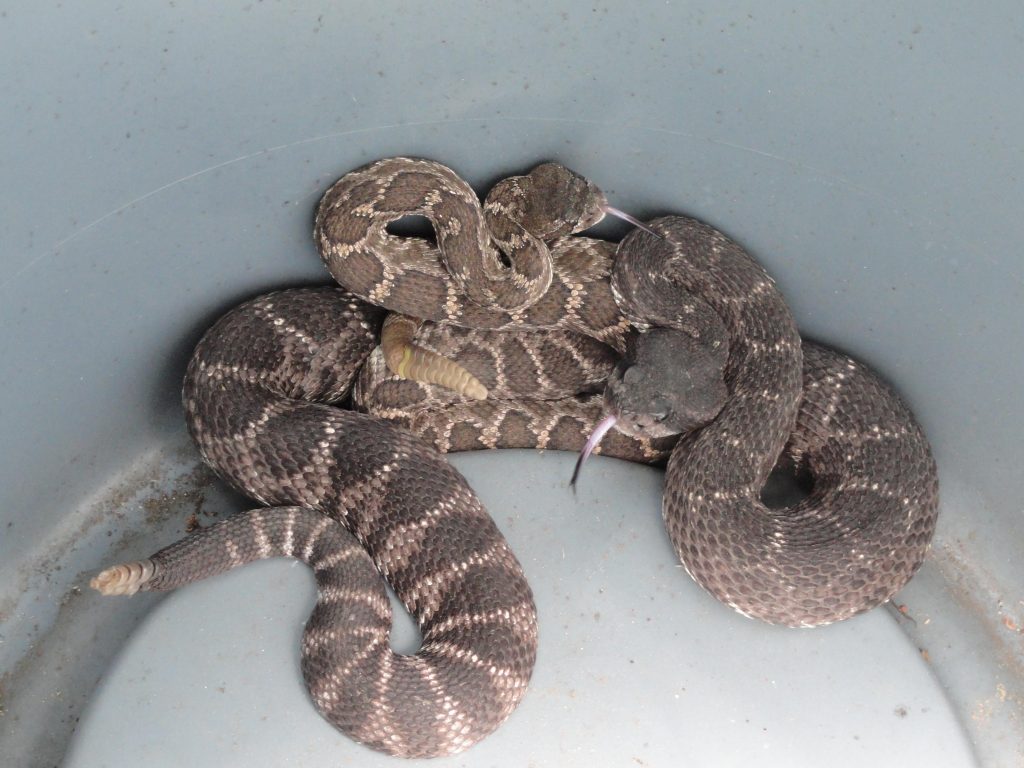 Always use care when relocating rattlesnakes in Big Santa Anita Canyon.  Everything’s blooming right now in the front country of the Angeles National Forest.   Hikers make their way up the Gabrielino Trail to the cool, moist beauty of Sturtevant Falls.  Colors are vibrant, sweet floral scents waft in the canyon breezes and the streams are as full as they’ll be until next winter’s rains.  This last weekend my wife and I were at our little cabin in the Big Santa Anita with all the windows open and the sound of bird song carrying throughout.  While raking, Joanie noticed the tail of a mature rattlesnake sliding underneath the low shutter of an enclosure attached to our toolshed.  I grabbed my snake stick (garden hoe minus the blade) and relocation barrel (20 gal. Rubbermaid trash can) for the task at hand.

Very carefully, I lifted the shutter to find a very healthy and cautious rattler looking back at me from the shadows.  Its’ neck and head were lifted in the manner of a cobra.  While prodding the snake with the stick, I mentioned to Joanie the possibility of two being present.  Up at Sturtevant Camp, we had once caught two snakes within a short distance of one another on a warm summer day.  One large female was in my wife’s flower garden and the other near the Ranger Cabin.

Sure enough, there was another snake!  This rattler was more slender and challenging to capture.  The larger one was easy to catch.  You just have to get her to drape across the metal hook at the end of the wooden handle.  Once that’s accomplished, just lift the serpent up and over the wall of the barrel, making sure to gently set down.  Next, we added the smaller partner.  The two immediately began to snap at one another!  Very unlike the behavior of the earlier Sturtevant pairing.    The larger, darker and stouter partner would occasionally utter a low and irritated “hiss……”  at the other.  Suddenly their bodies would slap up hard against each other.  Certainly, it was time to release them to the unconfined wilds of the Big Santa Anita Canyon’s East Fork, away from all human habitat.

The snakes continued to rattle inside the barrel which was held snugly up to my back as we hiked up the quiet side canyon.  The rattling sounds a bit like a snare drum that never stops.  When we reached the spot of disembarking, it was just a matter of carefully removing the lid and turning the barrel on its’ side as  sliding snakes made their way down the wall to the earth.  Both snakes were worn out and just lay side by side very peacefully.  We watched down as warm spring light spilled down on both these fascinating and terribly misunderstood creatures.  The larger snake had a crimson dot, perhaps from a nip, on her snout.

So, keep your eyes and ears open for rattlesnakes, especially as the temps rise and the days lengthen.  Rattlesnakes, like all snakes, are solitary and reclusive creatures.  If you should happen upon one while out on a hike, just give it distance and a way out.  Let it live in peaceful solitude.  They belong, too, in this vast and varied universe of life.

It’s July and summer temps continue to ramp up into the triple digits in the San Gabriel Valley.    What a great time to head up into the cooling depths of the Big Santa Anita Canyon!  This time of year, it’s often possible to experience temperatures reaching up into the 90′s, especially where you park your car up at Chantry Flats.  Out in the open sun it can feel more like a 100 degrees, especially when you’re out hiking up or down the paved fire road between Chantry Flats and Roberts’ Camp.  The summer sun not only bears down on you from above, but heat then is re-radiated back up off the pavements and light colored expanses of rock along the mountainside.  This is a scene that requires thinking ahead for your next trip out of Chantry Flats.  Bring plenty of water for each person.  Two liters per person is really not too much when it’s hot.  Wear a good sun hat and consider the benefits of applying sunscreen as well.

During the height of the summer sun, the warmest hours are quite often between 12:00 noon and 3:00 p.m.  While the sun’s up high, we seek the welcome of shade and so do the reptiles.  Of the myriad forms of wildlife to be found in the Big Santa Anita Canyon, it’s the reptiles who are in their season between March and November, with the high point of sightings taking place in late June through August.

Because reptiles cannot regulate their body heat, such as humans can, snakes and lizards are utterly dependent on the temperature of the air.  To regulate their internal body temps, snakes and lizards must seek shade during the middle of the day when the sun’s bearing directly down into the canyon.  As the sun’s angle shifts later on in the day, these animals will venture back out from their hiding places.  During summer evenings, it’s not uncommon to see the occasional snake out on a road surface, which still emits stored heat from the baking day.  When traveling back down the Chantry Road on a summer evening, try to slow down so as to avoid running over these defenseless animals.  They’re just trying to seek a little warmth against the cooling night.  As the morning sun begins to make its’ presence, watch for snakes and lizards sunning themselves out in the open as they attempt to warm back up from the evening’s coolness.  This pattern of seeking, avoiding and then seeking heat is an endless pattern in the life of any reptile.

In Big Santa Anita Canyon, most of the species of snakes are non venomous.  Our only venomous snake is the Southern Pacific Diamondback.  Probably one of the most misunderstood creatures of all times, rattlesnakes are by their very nature shy and secretive, avoiding human contact if at all possible.  Rattlesnakes should not be approached or provoked.  Their rattling and coiled stance is a defensive behavior.  If given the chance, any rattlesnake will eventually retreat and seek to create as much distance between itself and humans as possible!   All lizards in the Big Santa Anita are non venomous.

As for snakes and lizards in our canyon, there’s quite a variety.   For more images of these amazing animals, go to http://herp-pix.org/As you hike on any of the trails out of Chantry Flats, it’s quite likely you’ll see lizards of all sizes and coloring, flitting alongside rock faces and down sandy stretches of trail.  Snakes often tend to be a bit more elusive, yet if you’re quiet and keep a constant watch into the shady hollows under brush, trees and rocks, you might just get to see one.   Like all creatures, reptiles have their part to do in the natural landscape.  These creatures feed mainly on insects, small amphibians, rodents and occasionally on one another.  The hiking trails out of Chantry Flats are a fantastic place to see these wonderful creatures. 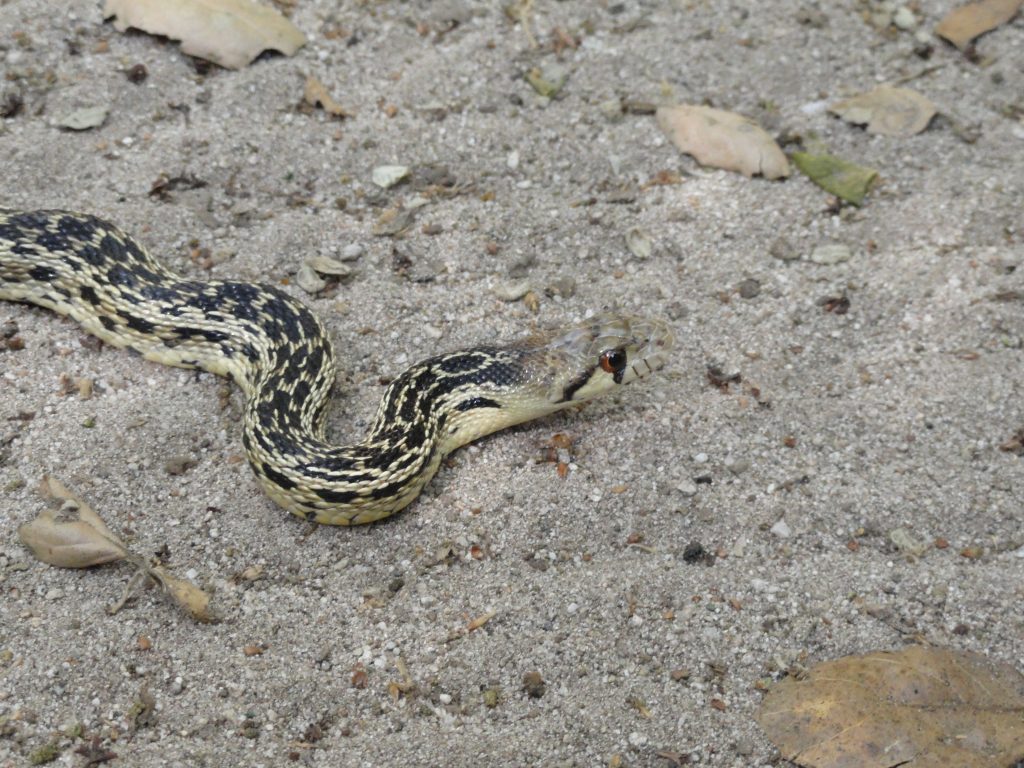